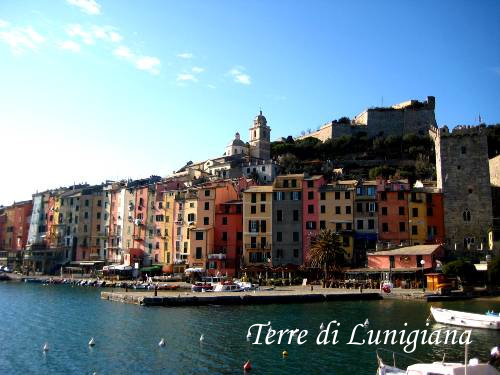 
In the eastern most part of the Spezia Golf is the breathtaking town of Portovenere. The town takes its name from a temple erected in the roman times in honour of Venere Ericina, on the promontory where the church of San Pietro now stands. Originally property of the lords of Vezzano, it was later bought by the Genevans in 1113, who then proceeded to build a castle over the existing fort. They also erected protective walls around the colourfully painted ligurian houses.
Portovenere still boasts its main tower, situated to the left of the entrance into Via Capellini, the main road that is also know as "il Carugio". The Piazza Spallanzani, which was originally the central point of the preroman Castrum Vetus, the church of San Pietro, on the far extreme of the promontory, and the church of San Lorenzo located high on the hillside, are all worth a visit. Facing Portovenere is the archipelago made up of the three isles of Palmaria, Tino and Tinetto, which form part of the Parco Naturale Regionale di Porto Venere. Tino preserves remains dating back to the 11th century, whilst Tinetto boasts remains dating back further still, to the 6th century. Tino is military territory, and is only accessible on the 13th of September, when it holds festivities in honour of San Venerio. The island of Palamaria, which is separated from Portovenere by a narrow stretch of sea called Le Bocche, attracts the largest number of tourists, thanks to its rich natural surroundings, which are a typical example of the Mediterranean landscape.
The surrounding area encompasses Le Grazie, a small fishing town where it is possible to visit the archaeological site of the Villa Romana del Varignano, and the late gothic sanctuary of Santa Maria delle Grazie. Not far from Le Grazie lies the town of Fezzano, a town composed of small houses crammed higgledy-piggledy along narrow streets and alleyways, and built up around the church of San Giovanni Battista, which has pride of place in the centre of the town and dates back to 1740.

What to see in Portovenere

A unique heritage, with typical Ligurian houses that lead to the church of San Pietro, the castle and the cathedral of San Lorenzo.