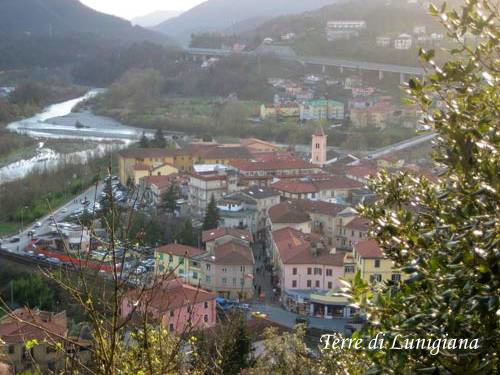 
Aulla extends along a flat zone, following the Magra river, in the point in which it meets the Aulella torrent, while the northern part is delimited from the course of the Taverone torrent. Aulla lies in a strategic position between the steps of the Cisa, the step of the Cerreto, the step of the Lagastrello. Because of the strafings of the second world war, the ancient village has gone almost completely destroyed, but on the surrounding evocative medieval villages like Caprigliola, Albiano, Bibola, Olivola and Pallerone have remained intact.
The village of Aulla was founded towards 884, when the Abbey of Saint Caprasio was built. Towards the end of XIII the century the territory passes under the jurisdiction of the Bishop of Luni, for being then disputed from Pisa, Lucca, Genova and the Malaspina family. Aulla is characterised by the Fortress of the Brunella, military construction of the XV century was built in a strategic position from which it could dominate all the city. The Fortress was erected probably under Giovanni delle Bande Nere. Today it hosts the Natural history museum of Lunigiana.

What to see in Aulla

The Abbey of San Caprasio and the Brunella fortress are the main monuments of Aulla. Nearby, stone villages as Caprigliola and Bibola stand on the surrounding hills.