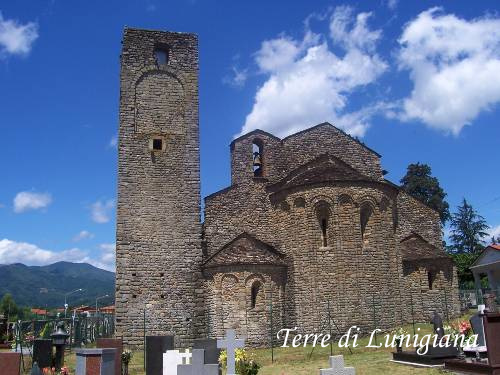 The Pieve di Sorano in Filattiera


Visiting Lunigiana, for the inexpert tourist, can turn out dispersive without a good guide or knowing the main attractions to see. The artistic patrimony is so varied and wide and sometimes hidden that there is the risk to get lost in long searches, when having mostly short holidays.
Starting our trip from northern Lunigiana, we find Pontremoli, rich city of art and history with a medieval heart. We must pay a visit to the Piagnaro Castle with the Museum of the Statue Stele and the Churches of Nostra Donna and San Francesco, with the complex of l’Annunziata. Nearby, nature and small villages are very interesting: short torrents like Verde, Gordana and Giaredo, and the small villages of Vignola, Guinadi, Bratto, Braia and the village of Zeri, famous for its gastronomy
Next to Pontremoli, on the right part of the river Magra, we arrive in Mulazzo, center of the Bancarelvino, a summer events where is possible to taste Lunigiana’s wine. Rich of castles, it is necessary a visit to Montereggio, village of the booksellers, the Castle of Lusuolo, the villages of Groppoli and Castevoli.
Back on the route SS62 of the Cisa, that cuts Lunigiana in two parts, we discover Filattiera, and its famous Romanesque Pieve di Sorano. In the village, up on a hill dominating the Magra valley, we stop to admire the Malaspina castle and the church of of San Giorgio, once a castle, of which remain only the tower. In the outskirtses, the medieval village of Ponticello, the towers-houses of Caprio and Rocca Sigillina, Logarghena and Lusignana.
Continuing our trip towards Villafranca and Bagnone, along the Francigena Way, we stop in Malgrate, and visit its castle. We head for Filetto, where every summer, at the beginning of August, a medieval market is celebrated in the old walled village. In villafranca, it is possible to visit the Etnographic Museum of Lunigiana and the rest of Malnido castle, while in Virgoletta, we admire the rests of the ancient castle.
Next to Villafranca, on the right part of the Magra, we find Bagnone, the old castle up on a rock. In Castiglion of the Terziere, Treschietto, Iera, Corlaga, Corvarola remain very interesting castles and rests.
Again on the route SS62 of the Cisa, leaving Villafranca, we arrive in Aulla, which old casque was totally destroyed during the second world war. The unique witness of the Middle Age is a part of the Abbey of san Caprasio, built before the first millenium. Dominatig Aulla, the Brunella fortress hosts Lunigiana Natural History Museum. In the nearby, many evocative villages like Caprigliola, with the medieval circular tower and the walls costructed by the Medici of Florence, Bigliolo, Olivola and Albiano.
Before heading towards the see, we visit the villages on both part of the Magra. On the right, Tresana, with the dismissed castle and the wonderful villa.
Licciana Nardi collects a inuasual number of castles, palaces and towers. The Castle of Terrarossa, Pontebosio, Licciana Nardi, Bastia and Monti, the palaces of Panicale, the towers of Apella, Varano and Vignale.
On the left side, we climb the hills up to the Florence of Lunigiana, Fivizzano, with the Medicee walls, the fountain, the Convent of the Agostiniani. Next to Fivizzano, we admire the medieval village of the Verrucola and its imponent castle. A little bit far away, the Castle of the hawk (castel dell’aquila) in Gragnola, Sassalbo, with the Botanical Garden of the Frignoli, Vendaso, Pognana and Viano with the Romanesque pievi, with the coves, Equi Terme, with its thermal waters and archeological interests.
On the border with Fivizzano, Casola in Lunigiana, where it is possible to visit the Museum of the Territory of the high valley Aulella and the ancient village with the tower. We find then Codiponte, with the splendid pieve and Regnano.
Back in Aulla, turning right on the Magra bridge, near San Caprasio abbey, we reach Podenzana, famous for the "panigacci" and where we can admire the castle and the pieve of Montedivalli
Dominating the Magra valley and the Mediterrenean Sea, we arrive in Fosdinovo, last village of our travel. Here we find the most beautiful castle of Lungiana, the Church of San Remigio, and the Oratory of the Bianchi. We can then visit Caniparoli with the villa Malaspina, Ponzanello and the rests of its castle, Marciaso and Pulica.