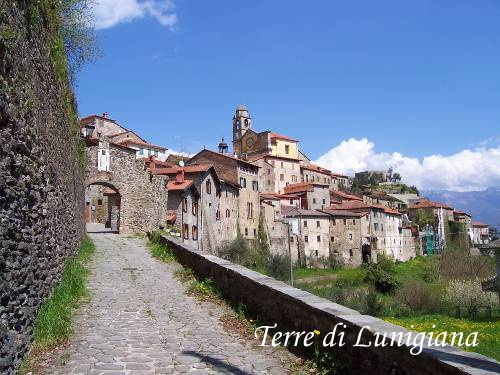 
Mulazzo lies in the high Lunigiana, on the right part of the river Magra. It extends from the low valley until the Appennines that separate the Vara river valley from the Magra river one and culminates in the Cornoviglio Mount. The territory is characterized by hills and low mountains. The territory of Mulazzo is rich of cultivations, in particular the land turns out favorable to the vineyards that produce wines of optimal quality annually. The passion for wine reflects in the BancarelVino fair, in which a prize is delivered to the best wine manufacturer and it is possible to taste wines of the zone.
From the XII century, Mulazzo was possession of the so called "dello Spino Secco" Malaspina branch and in 1221 it became the capital of all the lands on the right part of the river and Villafranca in Lunigiana on the left side as well.
The village has two doors of access and conserves its original structure. We can find in it the tower of Dante, what remains of the castle today,the old arch of the aqueduct and the main square.
In the nearby it possible to visit the medieval village of Castevoli, Lusuolo, Groppoli and Montereggio, with their castles and superb views on the Magra valley

What to see in Mulazzo

The historic center of Mulazzo ises on the right side of the river Magra, with the hexagonal tower of Dante, the rest of the Malaspina Castle. And then Castevoli, Lusuolo, Montereggio...