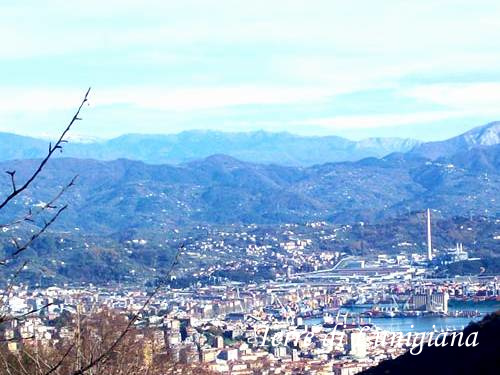 View of La Spezia from Biassa


Spezia is located in the centre of the Gulf of Poets, in the large bay that stretches from Lerici to Portovenere, which is sheltered by verdant hills. Documented for the first time in the 12th century, it was first ruled by the Obertinians, only to be later taken over by the Bishops of Luni. The Genevans are responsible for the construction of the city walls, and a castle that still stands today. The main developments in the 19th century came about due to the construction of the Military Naval Dockyard.
Despite its industrial vocation, the city has carefully preserved various points of cultural and historical interest. Via Prione is possibly the most important, with its typically ligurian narrow streets and alleyways, which are lined with the former residences of the marquis of Doria and the Massa Princes. Corso Cavour is lined with lovely 17th century liberty style palaces, whilst Piazza Sant’Agostino gives rise to some of the oldest buildings in Spezia and the characteristic church of San Giovanni and Sant’Agostino. Piazza Chiodo gives rise to the majestic entrance to the Naval Docks, whilst Piazza Verdi boasts the Palace of the Poste and Villa Marmori, which was built in 1923 and is today home to the Musical Conservatorium. Via Vittorio Veneto is also worth a visit, if only to see the Palazzo della Prefettura and the modern Cathedral di Cristo Re di Secoli – a large circular building with an imposing cupola. The old cathedral, which dates back to the 13th century and which is dedicated to Santa Maria
Assunta, is located in Piazza Beverini.
Situated on a slight relief known as il Poggio is the castle of San Giorgio. Built in the 14th century, it has undergone various reconstruction and extension works over the years. Today, it houses the Ubaldo Mazzini Museum, which boasts a collection of Rosetta stone statues. Other museums include the Amedeo Lia Museum, which houses a collection of ancient and medieval art, the Sigilio Museum, the G. Podenzana Ethnographic Museum, the Maritime Museum, the National Transport Museum and the Centre of Modern and Contemporary Art.
In the area surrounding Spezia are the seaside towns of Campiglia, Tramonti, Biassa and Cadimare, and Pitelli, Pieve di Marinasco and Migliarina. Pieve di Marinasco boasts an ancient roman church, whilst Migliarina is home to the church of San Venerio.

What to see in La Spezia

La Spezia is home to many museums with a historic center dominated by the castle of St. George. Most of the districts include unique villages as Biassa, Campiglia and Cadimare.